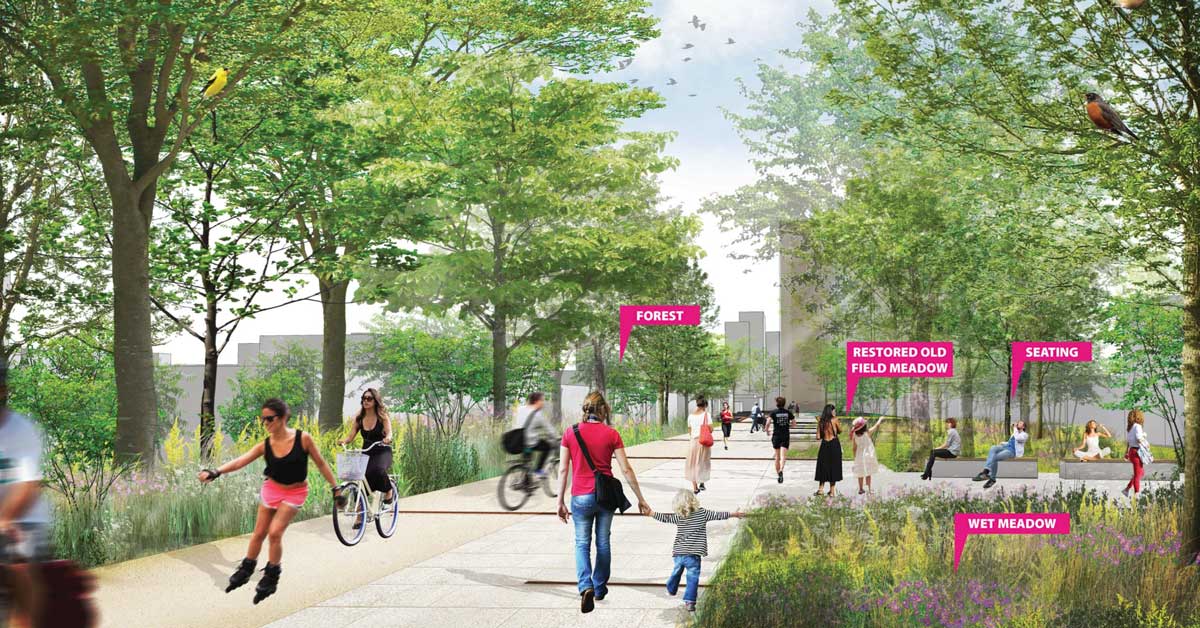 Northern New Jersey – May 18, 2021 – Open Space Institute, along with the New Jersey Bike & Walk Coalition and September 11th National Memorial Trail Alliance, announced today the critical support by the statewide, civic and business community for the Essex Hudson Greenway Project. This support, which includes the endorsement of the Statewide Hispanic Chamber of Commerce of New Jersey, as well as local Hudson and Essex businesses and business-civic organizations, stems from the positive business/economic impact and job creation potential the Greenway would bring to this part of northern New Jersey.

“Decisions about walkable areas determine much more than where roads or bridges will be built. They determine the connections that people will encounter and the ecosystem of diverse resources benefiting every aspect of our lives. It is the convergence of equity, opportunities, and growth for our small business community,” said Carlos A. Medina, Esq., President and CEO of the Statewide Hispanic Chamber of Commerce of New Jersey.

According to a 2017 report by the Outdoor Industry Association, outdoor recreation – including greenways – generates $887 billion annually, creates 7.6 million American jobs, $65.3 billion in federal tax revenue, and $59.2 billion in state and local revenue, all the while making communities healthier and safer. A 2011 study from Greenways, Inc. found that the average annual economic impact from trail development can be calculated to about $100,000 per mile, and often more. The study cites the economic benefits of multiple trails ranging from $73,500 – $137,500 per mile.

The proposed Essex-Hudson Greenway would create nearly nine miles of linear park, connecting Montclair, Glen Ridge, Bloomfield, Belleville, Newark, Kearny, Secaucus, and Jersey City.  In July 2020, the Open Space Institute (OSI) reached a preliminary purchase and sale agreement with Norfolk Southern Railway Company for property in Essex and Hudson Counties for the purpose of the Greenway. The purchase agreement has a sale deadline of January 2022.

The potential that comes with the development and construction of the Essex Hudson Greenway is just one of the reasons why so many of the special business improvement districts (BIDs) have applauded the project as well. Among the BIDs who have endorsed the project are the Bloomfield Center Alliance, Journal Square Community Association (Jersey City), Montclair Center Business Improvement District, and the Mt. Prospect Avenue Special Improvement District. A complete list of the organizations, businesses, and other groups that have endorsed the Essex-Hudson Greenway Project is available at Essex Hudson Greenway | List of Supporters.

“Communities that involve themselves directly in the development of greenways find that such activity assists area employers to attract talent, enhance recruitment, and retain valuable employees. Nationwide, communities of all sizes are finding positive economic impact and significant business development as a result of increased tourism, enhanced connectivity, and stronger downtowns,” said Chris Bernardo, President and CEO of Commercial District Services, which provides management services to both the Mt. Prospect Avenue Special Improvement District in Newark’s North Ward and the Journal Square Special Improvement District in Jersey City’s Journal Square district – two areas where bike pathways and infrastructure have been prioritized in recent years. “In and around the proximity of these multi-use trails, local small businesses can flourish, creating a more attractive environment for employers, enhancing other tax revenue, and leading to an overall neighborhood revitalization.”

“The completion of the Essex-Hudson Greenway will have a profound impact on the Bloomfield Center downtown district. While this area is already seeing much growth with new businesses, residents, and housing, the advent of this linear park will bring visitors from far and wide, helping to make Bloomfield Center that much more attractive to entrepreneurs and other investors,” says Ollyn Lettman, Executive Director, Bloomfield Center Alliance. “Given its economic benefits, we believe the Essex-Hudson Greenway will undoubtedly strengthen Bloomfield’s downtown district and hope to see the project move forward in the near future.”

The Open Space Institute and its partners have already begun investing in planning, surveying, environmental assessments, and more. This preliminary work is already supporting jobs associated with planning and acquisition work that will lead to hundreds more design, engineering and construction jobs. The nature of the greenway project also offers the potential to support new and existing businesses throughout the length of the linear park.

“As our society emerges from the COVID-19 pandemic, and our overall economy recovers, members of our community may be looking for new or alternate employment options. In addition to the jobs created by the early planning for the Greenway, we look forward to the influx on jobs and business during its construction. Ultimately, the Greenway will make our businesses more successful, and, as a result, allow us to employ more members of our community,” said Felix Lopez Montalvo, Past President of the Mt. Prospect Avenue Special Improvement District and owner of The Law Offices of Felix Lopez Montalvo. “As millennials look for jobs, there are certain things, like green spaces, that they want their community to have. Our aging populations want walkable communities too!”

In terms of job creation, a United States Fish & Wildlife Survey found that a project like the Essex-Hudson Greenway will generate more jobs than a comparable infrastructure project, like new highways. A 2019 study by the East Coast Greenway Alliance confirmed a similar economic multiplier effect. A 2012 study found that for each $1 million investment in greenways, bike lanes, and sidewalks, 17 jobs were created – nearly 50 percent more additional jobs than other transportation-related projects.

“As a restaurateur with businesses throughout northern New Jersey, I support the Essex-Hudson Greenway. The region is already attracting young urbanites looking for more amenities than big cities can offer,” said Luck Sarabhayavanija, Founder and CEO of Ani Ramen House. “What better addition to the region than a forward-thinking, environmentally friendly greenway that would link the communities of Jersey City and Montclair? The greenway will also serve to invigorate and revitalize all the communities in between with activity. The Essex Hudson Greenway will keep northern New Jersey growing in the right direction. We look forward to watching this groundbreaking project come to life.”

In 1992, a National Park Service study estimated that the average economic activity associated with a multi-purpose trail was $1.5 million annually. Furthermore, the U.S. Fish and Wildlife Service also conducted a survey that found that birdwatchers – who are avid users of greenways – spend over $5.2 billion annually in and around shared-use trails and greenways. A more recent 2019 study by the East Coast Greenway Alliance showed a more than ten-fold return on investment for the 3,000-mile trail from Main to Florida. For this large-scale project, a $2.5 billion investment this decade has the potential to turn into over $25 billion in benefits as the route is completed.

“I am excited about the prospect of how the Essex-Hudson Greenway would complement efforts to strengthen the Mount Prospect neighborhood and the City of Newark,” said Michelle Lolo, CEO of Hope & Esperanza Community Health Center.  “The growing investments in medical and health-related enterprises in this community will not only generate opportunities for job expansion and support area businesses but, like the planned linear park, will promote a healthier lifestyle for our residents. The Greenway and we are all part of the puzzle that leads to a healthier Newark.”

Residents of communities all along the property have been campaigning for more than a decade to create a linear park that would serve as a “shared-use path” for people walking, riding a bicycle, running, rolling, or just relaxing along this corridor. The project also offers the potential to reduce traffic and stormwater runoff in towns along the rail line, improve transportation options for residents, and allow for improved infrastructure connectivity for things like broadband and emergency response.

Founded more than four decades ago, the Open Space Institute (OSI) has partnered in the protection of 2.3 million acres across eastern North America from Quebec to Florida. Over the past 16 years, OSI has worked to protect more than 21,000 acres of New Jersey farms, forests, and local parkland within the Highlands, the Pinelands, the Bayshore, and the heavily developed northeastern suburbs. In addition to the Essex Hudson Greenway, OSI’s current projects include efforts to help protect land and improve water quality in the Delaware River Basin and provide public access to the 1,200-acre Jersey City Reservoir in Boonton and Parsippany.

The New Jersey Bike & Walk Coalition (NJBWC) is the only statewide advocacy organization for bicyclists and pedestrians and provides a collective voice for everyone who believes that a more rideable and walkable New Jersey means a more livable, equitable, and sustainable New Jersey.  NJBWC officially adopted the Essex Hudson Greenway Project in 2014 and has been a leader in building the advocacy campaign to make it a reality.

The September 11th National Memorial Trail is a 1,300-mile system of trails and roadways that links the National September 11 Memorial and Museum in New York, the National 9/11 Pentagon Memorial in Arlington, Virginia, and the Flight 93 National Memorial in Shanksville, Pennsylvania. The route serves as a symbol of national resiliency and character and as a tribute to the fallen heroes who perished on September 11, 2001, and the many heroes who have committed themselves to the response for their country.