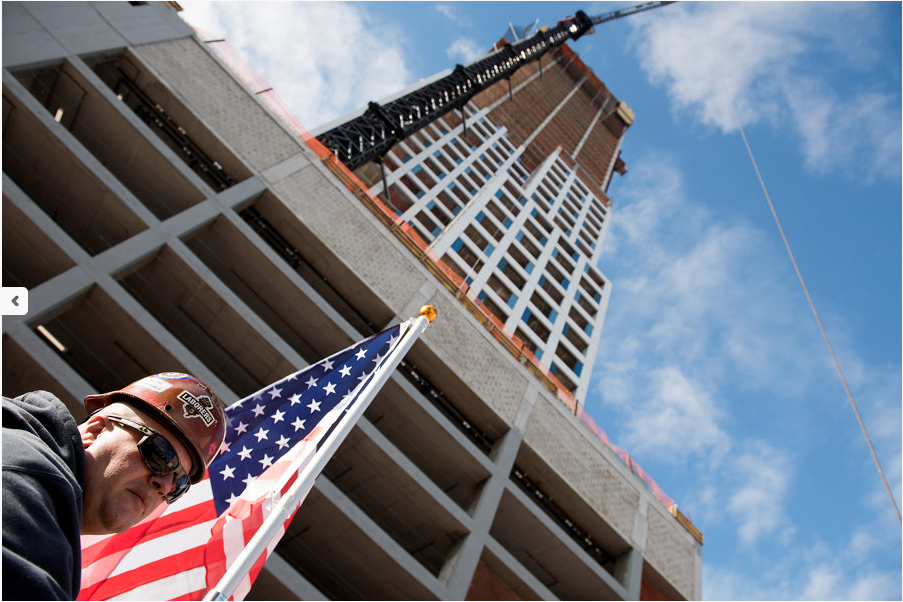 From atop new tower, everything else in Jersey City is down JERSEY CITY — For the best views in Jersey City, you’ll have to join a very exclusive club: the construction crew working on the first tower of the Journal Squared development.

From the upper floors of the $203 million high-rise, which today reached its apex, 563 feet, you can take in the Statue of Liberty, Downtown Jersey City, the Pulaski Skyway, One World Trade Center and the rest of Manhattan — even, its developer says, as far west as Pennsylvania.

There are taller buildings in Jersey City — the Goldman Sachs tower rises more than 200 additional feet off the ground — but the elevation in the center of the city gives Journal Squared an advantage, sweeping vista-wise.

“It’s inspiring to have made it to the top,” developer Jonathan Kushner said on the 43rd floor of the high-rise, one of three he plans to build just east of the PATH transportation hub. “It’s a day that seemed so far off just a couple of years ago.”

Kushner, president of KRE Group, gave members of the media and elected officials a sneak peek of the tower this afternoon, leading them through the construction equipment and debris on the ground level, into the cage of an elevator that workers use to reach upper floors and onto the 43rd story of the 53-story building.

Journal Squared — the second tower will top out at 70 stories, the third at 60 — is the first major mixed-use development to come to the city’s central neighborhood after decades of promises to revitalize Journal Square. The project received a 30-year tax abatement from the city in 2013, while the first tower nabbed $33 million in state tax breaks.

“It’s going to bring a lot of life to Journal Square,” said Councilman Rich Boggiano, who represents the area.

MORE: See what Journal Squared will look like when complete

But for now, construction continues. Kushner said he expects to start leasing its 538 apartments by December 2016. And then it’s onto the second tower, then the third, for a total of 1,838 rental units, plus retail and restaurant space. Meanwhile, Jared Kushner, Jonathan’s cousin, is developing two towers with KABR Group on the southern end of the PATH hub.

Dan Gumble, business manager for International Brotherhood of Electrical Workers Local 164, said today that when he grew up his grandparents lived nearby on Pavonia Avenue. Gumble said he went to the local theaters and played ball on the lawn of the Hudson County courthouse