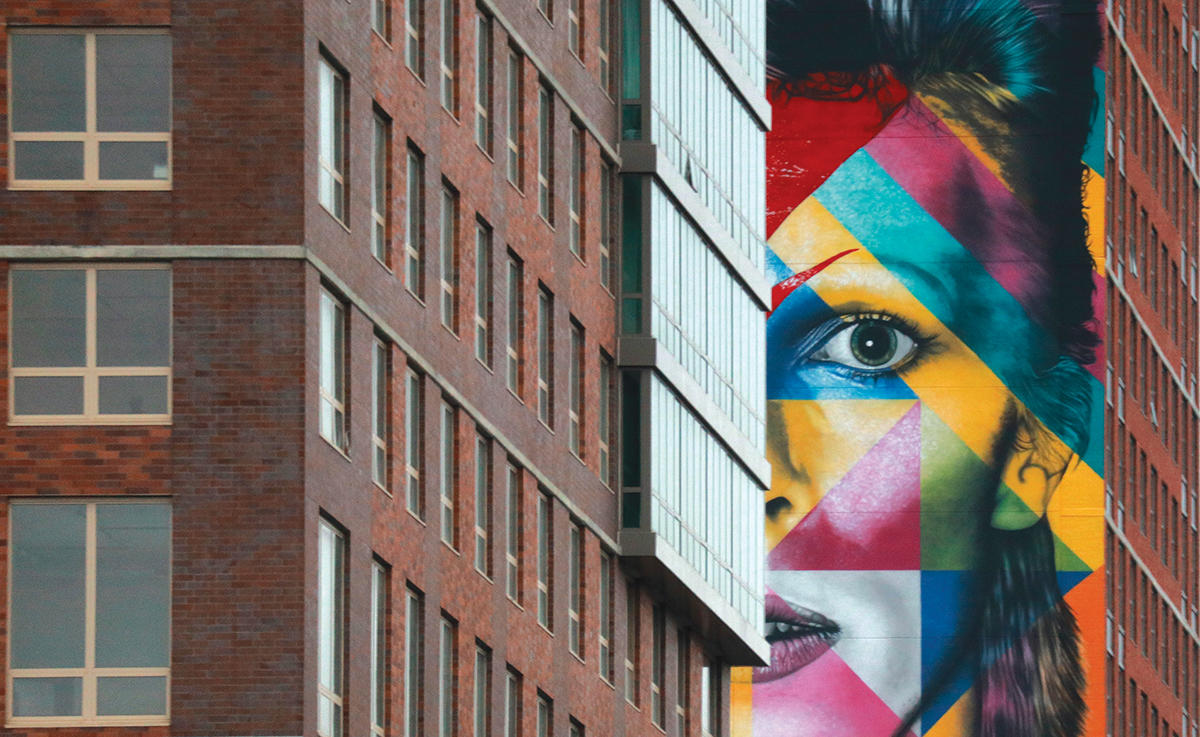 Last year, as the potential L train shutdown loomed over Williamsburg, Joelle Chilazi started fielding more calls from worried Brooklyn residents. Then in November, when Amazon announced plans to move to Long Island City (before changing its mind), the Keller Williams agent heard from Queens residents fearing that they’d soon be priced out of their neighborhoods.

On a near daily basis, Chilazi can be found with renters and buyers uprooting from neighborhoods across New York City who are considering a move to Jersey City. And often, they have one thing in common: They’re searching for bargains.

“About 70 percent of my clients come from the city,” said Chilazi, who recently represented a couple relocating from Harlem who closed on a $1.3 million Jersey City brownstone.

While the Jersey City development story is not a new one, sources said the city has hit a tipping point. And there’s a lot more product coming down the pike.

According to the Marketing Directors, a development advisory firm, over the next three years, 12,058 residential units are scheduled to come online — about 10,000 of them rentals.

But as those projects rise out of the ground, there are some concerns brewing — mainly, can all of that inventory be absorbed, and can the already strained transportation infrastructure handle even more passengers?

Bob Antonicello, president of the boutique brokerage and advisory firm Grid Real Estate, said that offsetting those worries is the fact that Jersey City is attracting younger generations who don’t want to move to the suburbs. Their presence, he said, will “help stabilize the market.”

The murals and graffiti that can be found all over town — much of it commissioned through a city program — have also helped give the area a trendy, urban feel, sources said.

The situation does not appear to be as troubling for developers, lenders and other real estate players in this market as it is in Manhattan and Brooklyn, where prices are higher. “If I’m building 500 apartments, would I rather only have 500 others to compete with rather than 1,500? Sure,” said Kushner Real Estate Group’s Jonathan Kushner, who is building multiple projects in the area.

“But the market is growing at a healthy rate,” he aded. “It’s not overbuilding to the point of saturation.”

Not surprisingly, much of the new development is clustered in Downtown Jersey City and in the Journal Square area around transit hubs like PATH stations and NJ Transit’s light rail. Ironstate Development Company and Panepinto Properties, for example, have 90 Columbus, which is adjacent to the Grove Street PATH station.

“If you’re directly on top of a transit stop, it’s a lot more desirable,” said Michael Barry, president of Ironstate, which along with Kushner has the greatest number of units in the Jersey City pipeline.

Of the 539 units at 90 Columbus, which began leasing in September, 244 have been leased.

As the market has evolved, Kushner — who runs the firm with his father, Murray, the estranged brother of Charles Kushner — said his firm’s model has focused on transit-oriented luxury rentals.

And the firm is currently developing (alone and with partners) three of the five biggest rental projects in Jersey City.

The second phase of its Journal Squared development — a three-tower project that will ultimately house 1,840 units — will bring 704 units to the market in 2021. The firm secured $258 million in construction financing for the project’s second tower in January. The 538-unit first tower, which was built in 2017, fully leased in 10 months, according to the company.

Along with Ironstate, KRE is also building the 549-unit rental 235 Grand Street and the 507-unit 351 Marin Boulevard.

While demand is strong, Jersey City hasn’t been completely immune to market uncertainty. Although the landscape hasn’t been characterized by the deep concessions that the New York City rental sector has seen, rental sweeteners do exist. A typical rental assumes a one-month concession on a one-year lease, Barry told the Real Deal.

In addition, rental prices have fallen in the last few years.

By contrast, Manhattan’s median rent was $3,300 in December. In Brooklyn, it was $2,738, according to Douglas Elliman.

Richard Wernick, head of residential leasing at the LeFrak Organization, which is building the massive Jersey City waterfront community known as Newport, said that although prices are a key driver of demand, “things are changing overnight” as the area draws in more buyers and renters who are opting to live there for other reasons. And the LeFrak Organization — which began Newport in the 1980s and currently has nearly 6,000 residential units built there — would know. Back in late 2017, it set a Jersey City record at its 381-unit rental the Ellipse when it leased a penthouse for $11,000 a month.

While that’s clearly a record-breaking outlier, it’s indicative of at least some demand at those kinds of prices.

Gilli Axel, an agent at Nest Seekers International’s Jersey City office, said that demand will only grow over time.

“There’s always going to be a market for people who want to live in a highly amenitized building,” she said. “[Developers] know this market is going to continue to improve.”

Roughly 65 percent of the calls the Marketing Directors fielded over the past year have been from developers looking to get a beat on the Jersey City market.

“We get calls every day asking about valuations and what to build,” said the Marketing Directors’ President Jacqueline Urgo, whose firm has worked on a number of local projects, including China Overseas America’s 781-unit condo 99 Hudson, which is scheduled for occupancy in late 2019 and will be the tallest building in New Jersey once completed.

The influx of projects over the last decade has intensified competition and led to something of an amenities arms race, similiar to the atmosphere in the New York City market.

“Other than the separation of a river from Downtown Manhattan, the only difference really becomes price per square foot,” Wernick said. Many of the amenities at high-end rentals rival those at condo developments, said Anthony Cosenza, senior vice president at Plaza Construction, the construction manager at 99 Hudson.

Fahri Ozturk, vice president of investments at Marcus & Millichap, said that while the market has cooled throughout the region, development sites in the area are still drawing interest because the cost of building is more affordable than it is in New York City.

Developers, he said, have primarily been looking for approved sites within walking distance of public transit.

“For sites in a good location, you’ll have a dozen interested developers,” he said. “In  2015 to 2016, buyers were really pushing the numbers and terms. Today, buyers may not be as aggressive.”

Developer interest, however, is still focused more heavily on rentals.

But condos are still harder to finance, and rental absorption has yet to become a concern.

“People are risk-averse, and the condo business in tricky and treacherous,” Kushner said.

Still, as the market continues to mature, the expectation is that more people will be looking to buy. “It’s appropriate for it to grow. A lot of people will want to own a piece of Jersey City,” Kushner said.

Five years ago, condos on the high end in Jersey City were going for around $900 per square foot. Now luxury pricing has reached $1,200 to $1,400 a square foot, Urgo said.

In addition, the new projects helped lead to a 9 percent jump in the Jersey City population between 2010 and 2017, according to the latest figures from the U.S. Census Bureau. As of July 2017, the population stood at 270,753.

“It used to be that people didn’t really consider the Jersey side of the Hudson,” Ironstate’s Barry said. “Now there are plenty of people who will go to Jersey City just as quickly as they will to Queens or Brooklyn.”

Developers say many of the residents who are buying or renting in their projects are either professionals in their 20s or early 30s or empty-nesters looking to downsize and be closer to New York City. And they seem to be committed to the area — at least for the short term.

At 3 Journal Square, for example, about one-third of current tenants are on 26-month leases, said Gordon Gemma, Panepinto’s director of investments and operations.

That, he said, is a “testament to the staying power.”

And with so many projects clustered around the city’s transit hubs, some are concerned the development could prove to be too much.

In 2018, PATH saw its second-highest ridership on record, with 81.73 million passengers.

“I don’t think the PATH train is keeping up with the amount of development,” Keller Williams’ Chilazi said.

Over the next 10 years, the Port Authority plans to invest $4.3 billion in the system — for repairing Hurricane Sandy damage, finishing signal-system upgrades and improving stations. Still, a steady increase of new Jersey City residents could strain the system.

The concern, Chilazi said, is especially acute because the PATH line to the World Trade Center will be shut down on weekends over the next two years. The ferry, which offers an alternative, is not likely to be enough.

To Kushner, the higher demand isn’t necessarily a bad thing.

“The PATH and the Port Authority are dealing with it,” he said. “It’s a great problem to solve for. We’re not overly concerned.”

For its part, KRE is planning to stay heavily invested in Jersey City’s residential market and is looking for opportunities in retail, industrial and mixed-use projects.

“In an area that used to have a parking lot, when you built 1,000 apartments, all of a sudden you need retail. You need more,” Kushner said. “We’re trying to take advantage of those needs.”